This is the first time all keris were cleaned and loaded to make the energy stronger. 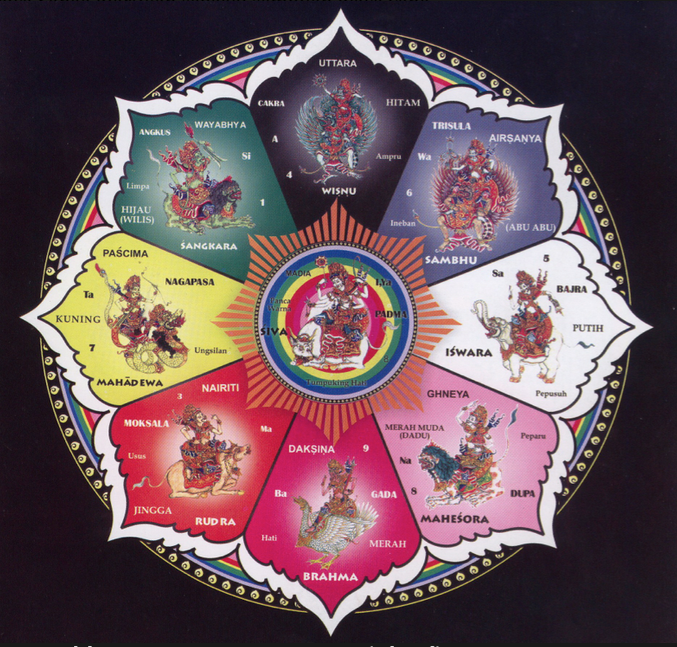 The Nawa Sanga, the Indonesian spiritual compas.
An old Nawa Sanga from the Majapahit periode 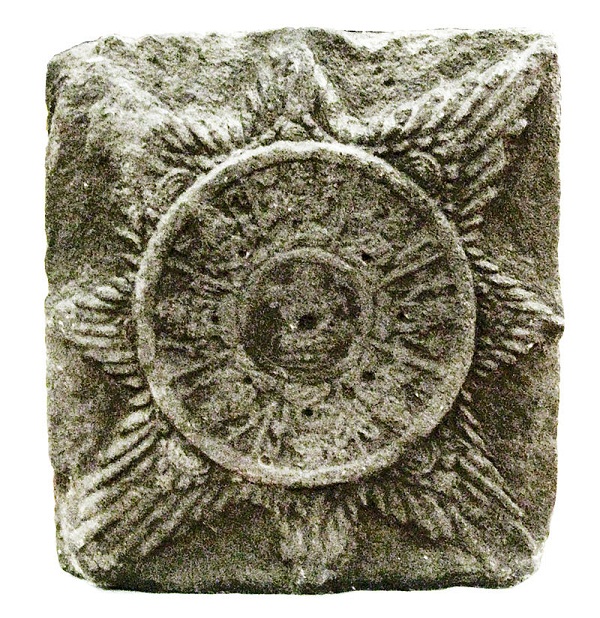 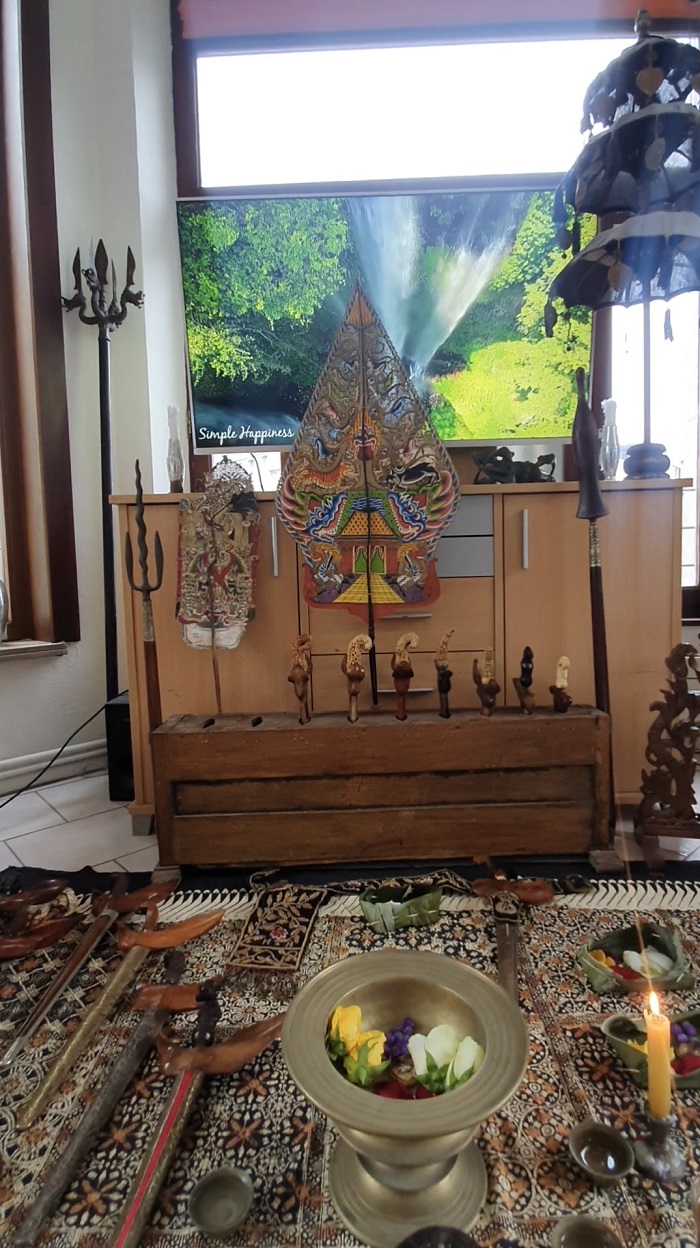 Offering place with left the Tombak Pataka and right the Payung pusaka. In the middle the Gunungan, the tumpal. The Wayang left is Batara Guru, Siwa. 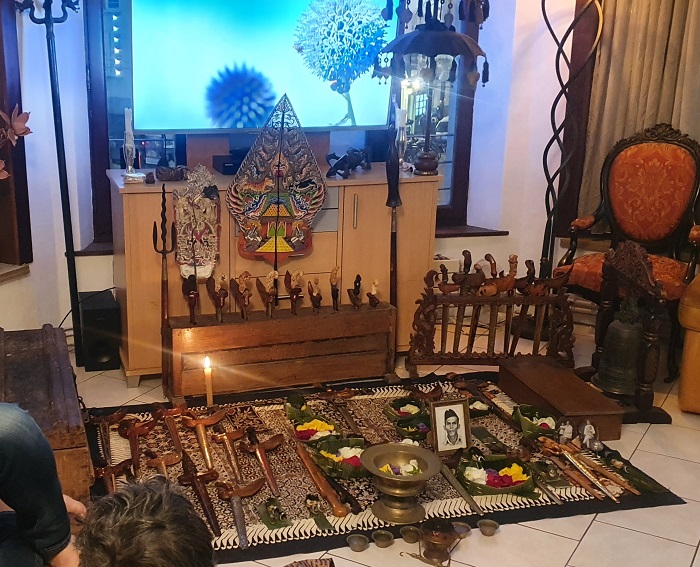 Marcel had a nice mantra for this special day starting with Ohm, Sang Hyang Widhi Wasa. Sang Hyang Widi Wasa or Acintya, the supreme god, the Batara Guru. Since WW2, the Pancasila was implemented in Indonesia, the 5 principles, which allows freedom of religion. It requires however that the religion must believe in a single omnipotent deity! To comply with the regulations, the Indonesian Hindu's have felt the need to reinforce the monotheistic component of the faith, thus the more emphasised role for Acintya. To refer to him, they selected the term Sang Hyang Widhi Wasa, the al mighty god, a term witch was coined in the 1930s by Protestant missionaries to describe the Christian god. This was also thought to be well adapted to describe the Hindu supreme deity. The name is now more commonly used by modern Hindu's in Bali. Outside of Indonesia we didn't have the time of Suharto and Sukarno were millions of people were arrested and killed, lots of people having keris, and we didn't have the implementation of the Panca Sila. That is why we still use Siwa, Batara Guru. Note: since 2017 Kejawen is also accepted as religion! 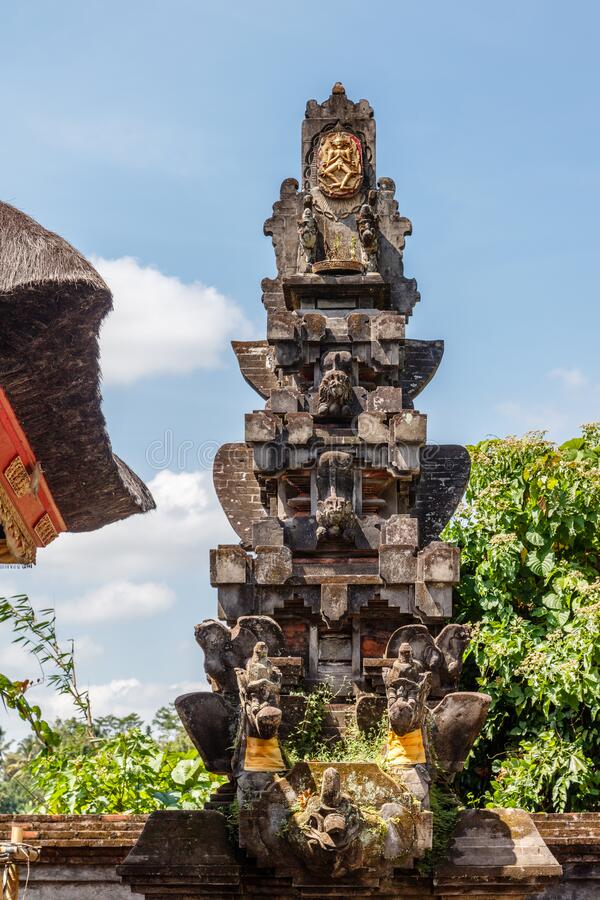 The little statue on top of the mountain is from Karbouw horn and it is Batara Guru, the highest divine energy. 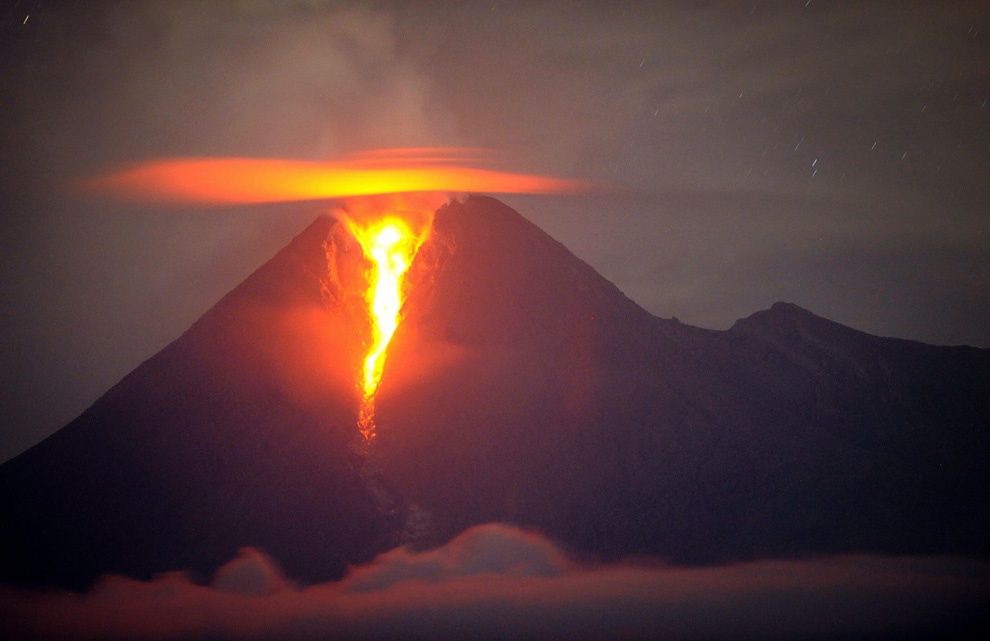 In the Tantu Pagelaran manuscript, the origin of the universe is described from the cosmic egg. This old document, written in Kawi, the old Javanese language, also describes the origin of Java.

When Java was still floating on the ocean, Shiva wanted to populate Java with people. To do this, Java had to be attached to the bottom first, the island was shaking and moving on the waves of the ocean. He ordered Brahma and Vishnu to move a part of the holy mountain Semeru, the mount Kailash in the Himalaya, from Jambudvipa India to Java. Vishnu then turned into a giant tortoise and took the mountain on his back, Brahma turned into a serpent and embraced the mountain. 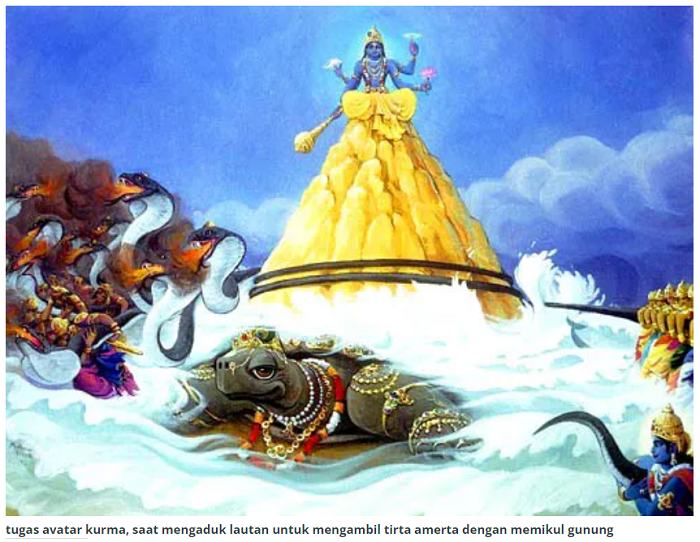 Part of the Mount Pawitra but the main part is the volcano Semeru. The top of the sacret mountain Semeru is were the spirits and gods reside including Siwa. Mount Meru is also the symbol for Shiva, just like the piramide shape commonly used in Indonesian art, the tumpal. The keris is also the symbol of the holy mountain!
Vishnu became the first king of Java, Sultan Randiawan who founded the first kingdom. The keris with the tumpal shape therefore also respresents the holy mountain Meru, the mountain Kailash.

In the text they give an Indonesian explanation of the Nawa Sanga. You can see in the drawing that the Naw Sanga we use is the old version with 4 wind directions and 5 deities, while the new Nawa Sanga, the Swellengebel, has 8 wind directions and 9 deities. Also it gives a little explanation about mount Semeru, or Mahameru. Also they speek about the Mandala. I alsways place the highest offering, a Mandala offering. 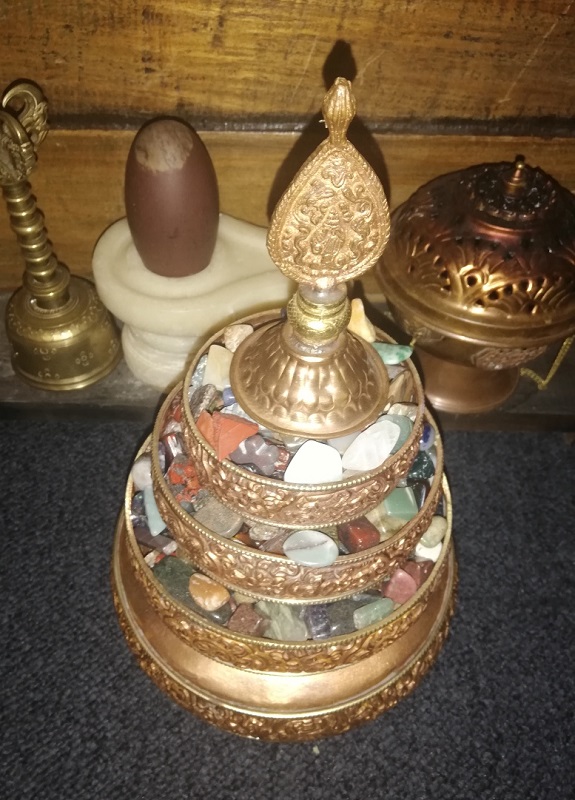 So following the Tantu Pagelaran, the keris as representation of the holy mountain, is more like a gate way to the spirits, may be more like an oracle, a spiritual object to get in contact with the spirits? So how about the energy of the keris, the devine energy the Mana? And what does an Empu do, attach a spirit to the keris and give it a mystical order by forging the keris in a typican dapur and pamor? 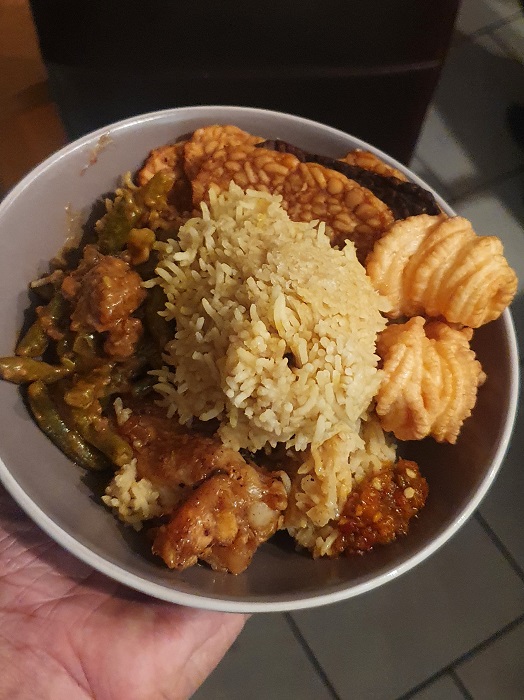 Selamat makan. The Slamatan is to protect all users, to make it kuning, yellow, i used not only fresh Kunir, but also Safran. Safran is also spiritual used because it is very good for your brain and memory.

Incense is important to clean the room and make a gate to the cosmos. For Incense i use 2 kind of incense for ceremonies like this. The yelow is Madu keraton what is actualy pertified honey and Indonesian black amber, the smell of the Indonesian utang from cenruties ago... 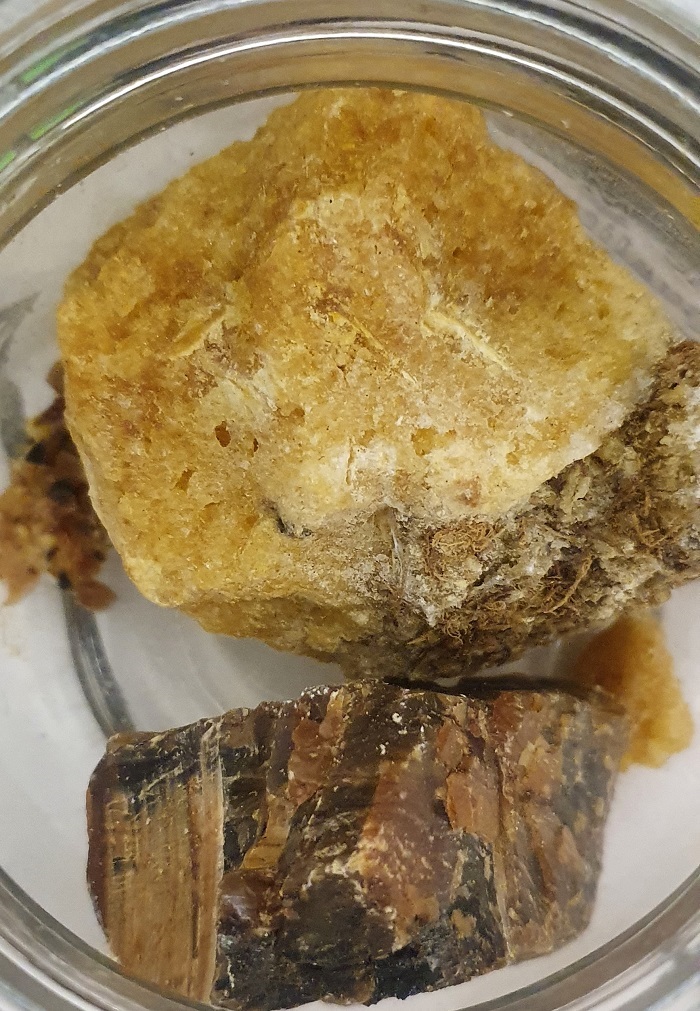 Now I think it's important that these traditions are preserved. And just like Christmas, you have people who celebrate it as a family celebration, and people who see it as a purely religious holiday. Everyone celebrates Christmas, but everyone a little differently. In my case there is another practical purpose, the cleaning and loading of the keris, the annual maintenance. Then you have to go through a number of steps, such as purifying the space, purifying the leaf, blessing the leaf and loading the leaf. And I'm very precise about that... 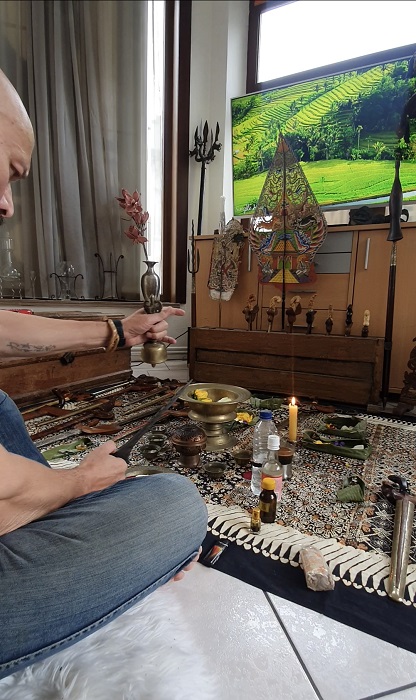 The Javanese Ghenta to call the spirits. Sound is the guna of ether, the spirit, just like coffee (bitter) the center of the nawa sanga.
On top of the Javanese Ghenta you can see the Vajra, with 4 sides, like the directions of the Nawa Sanga, with in the middle the lingam, the symbol of Siwa. The keris is also a lingam, the representation of the mount Semeru in Java, derived from the mount Meru in the Himalaya, the mountain Kailash.

The Indonesian Ghenta is a very interesting object. It contains multiple spiritual symbols, is good to keep the Buta's away, it calls the devine powers and feeds us people. 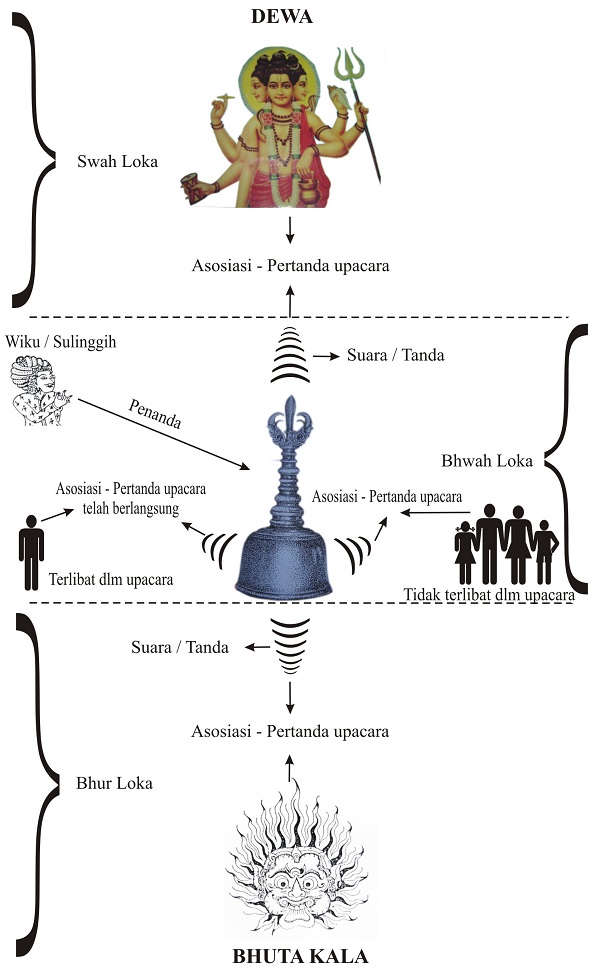 It has the compas on top, with in the center the lingam, it has the 7 chakra's with the 2 thicker chakra's representing the Samkya origine theory, ans the 3 circles on the bell representing satva raja and tamos, Brahma, Vishnu and Shiva. So the female energy, the Shakti uses the satva raja and the tamos to make things happen... 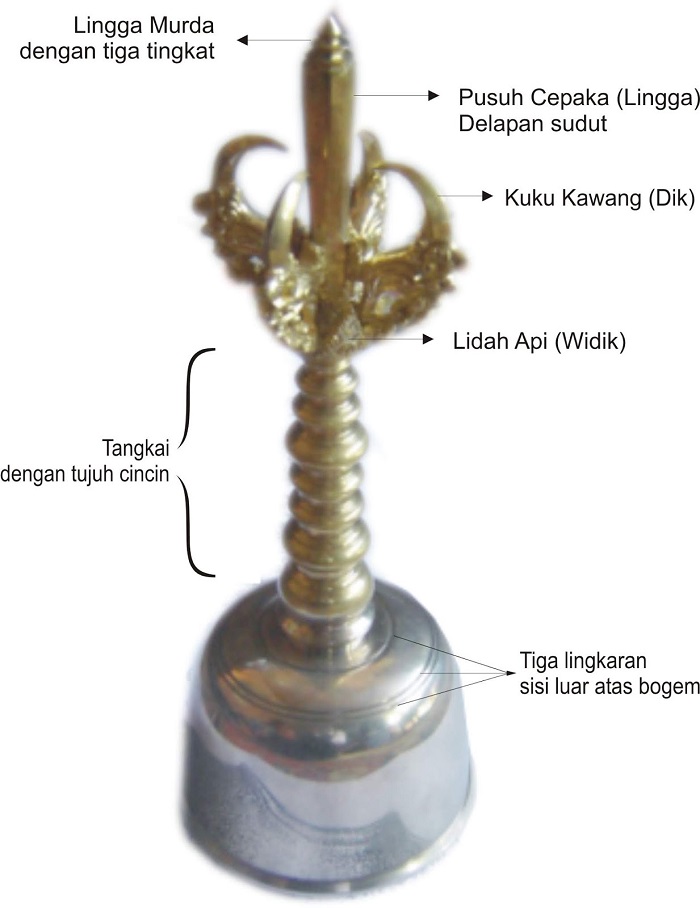 Rose water have strong spiritual properties, it is believed that rose water can clean negative energy. I always use rose water to clean and holy water from Indonesia to bless. 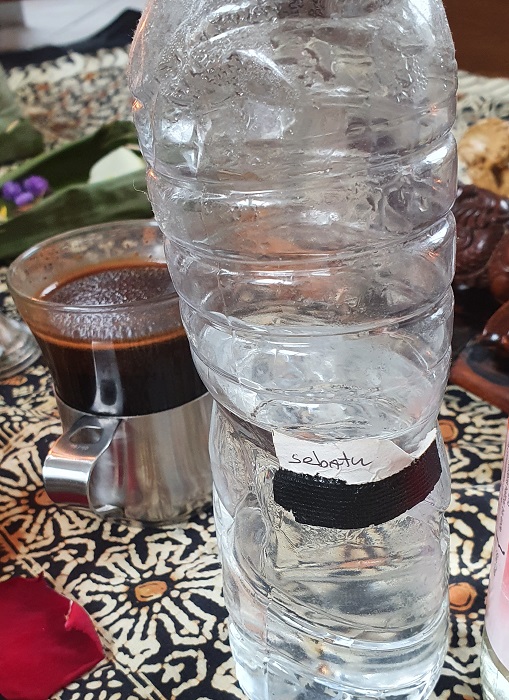 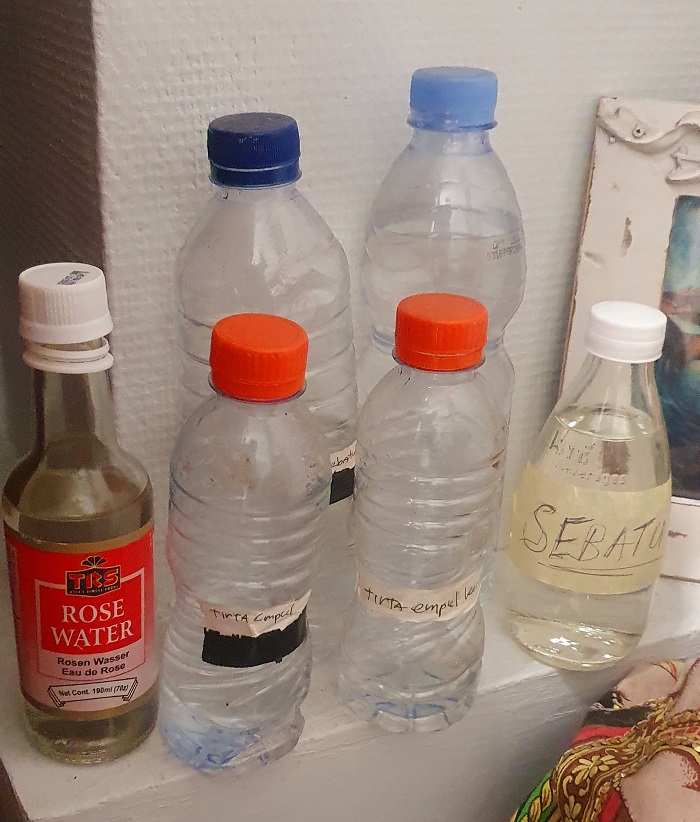 The holy source of Sebatu 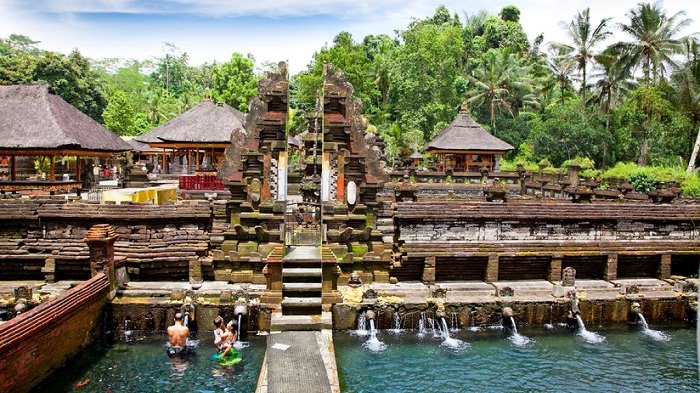 This is a new keris, i don't know him yet, so i choose to do nothing with it. What if the spirit comes alive when working on it. I experienced that once... No i choose to leave new pusaka first and the time will come to start with the blade, or maybe not... 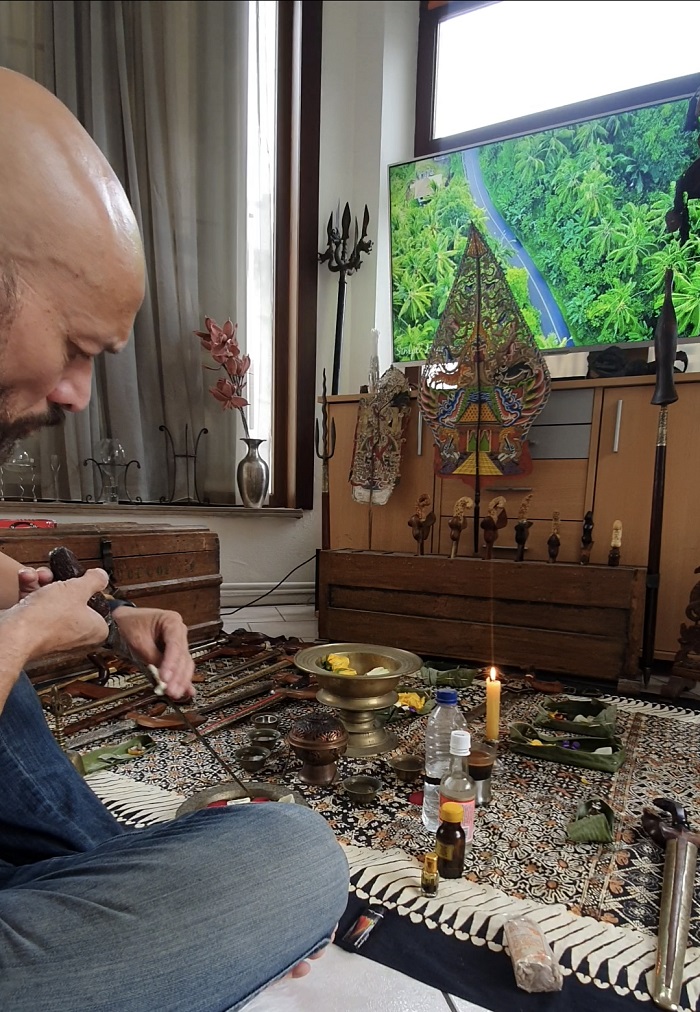 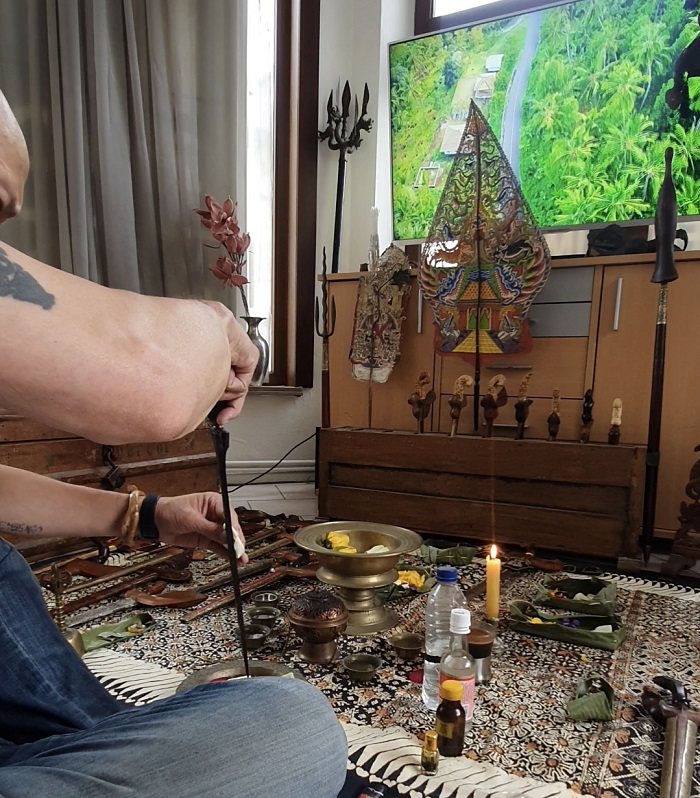 Oil to give the blade a good smell so the spirit becomes active. 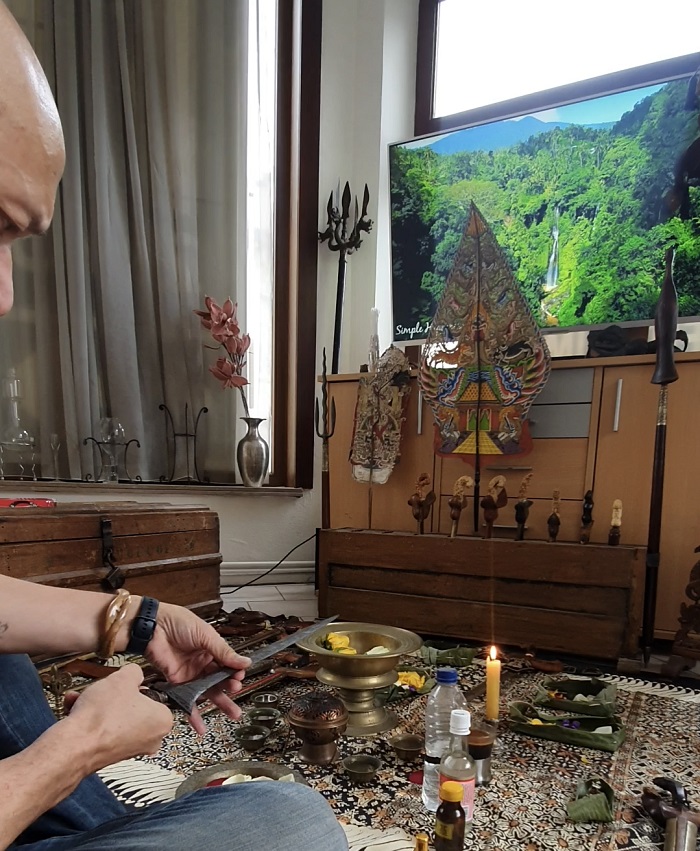 About the energy of a keris; Before the Javanese Hindu Boeddhist tradition, there was an animistic believe in Indonesia, like still in Papua Nieuw Guine or Borneo. The primal animistic energy is called Mana.Mana is not a person or a ghost, that is in the movies. Mana is the cosmic devine energy what is in everything around us. In stones, in trees, in animals in us...To keep the enery present, offers are needed. If you don't offer the energy is gone! The highest offering is blood, because blood contains the most of Mana. That is the reason when you go to Bali, on special days, away from the tourists, there is blood everywere, from offering mostlu chickens. In Java we use the Ayam Cemani.
So when cleaning with one of the new keris, and i already saw the beautiful dress and mendak with inten, one of the keris took blood... 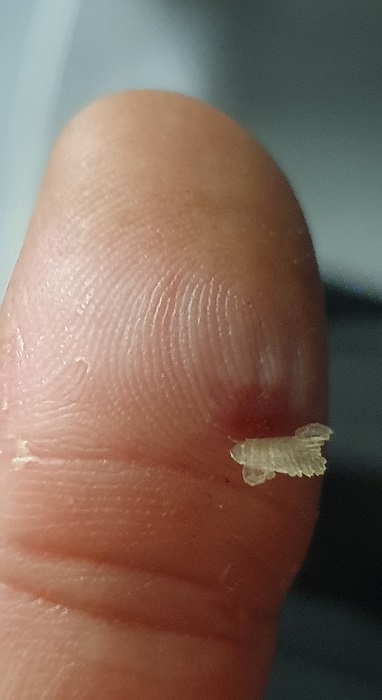 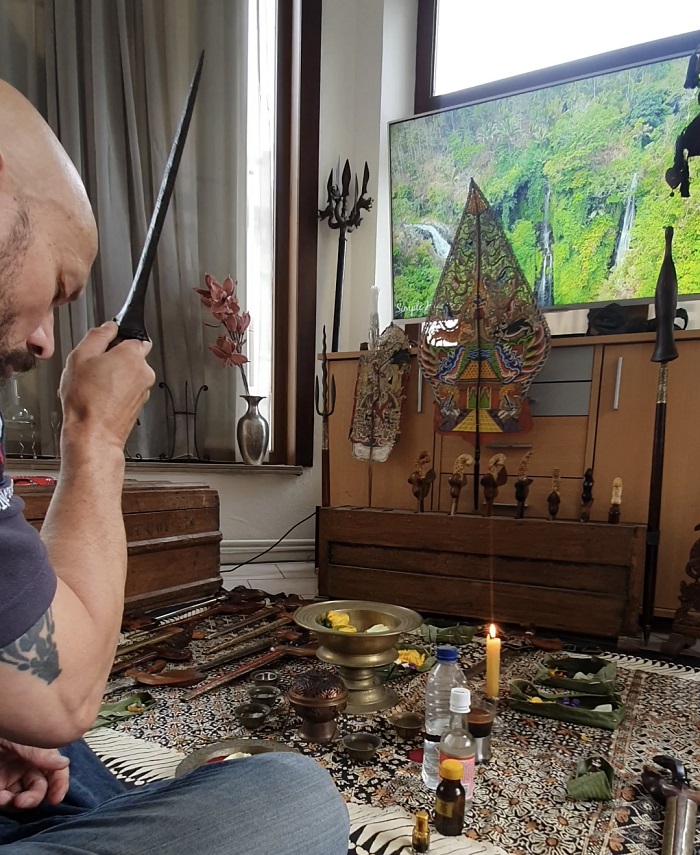 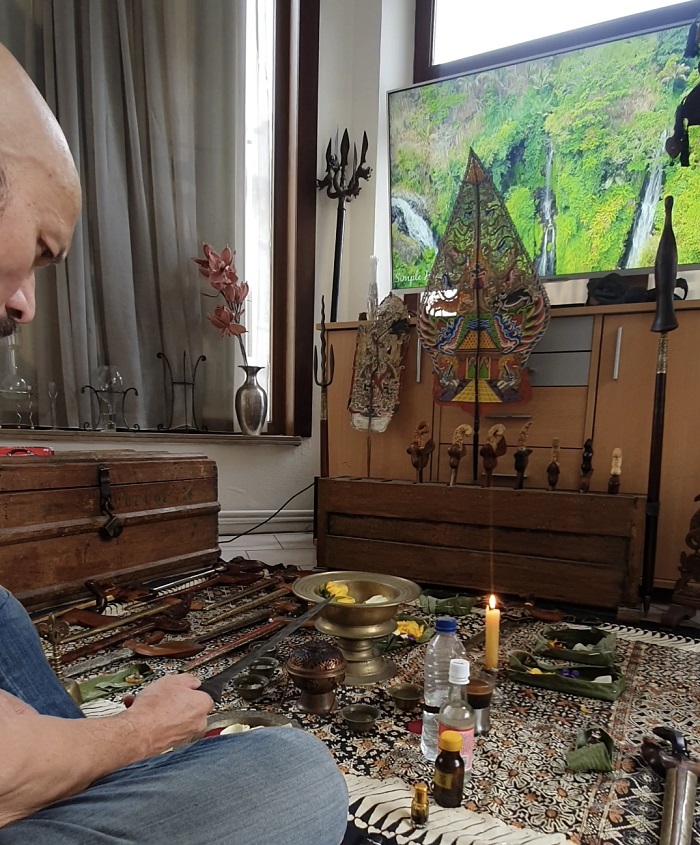 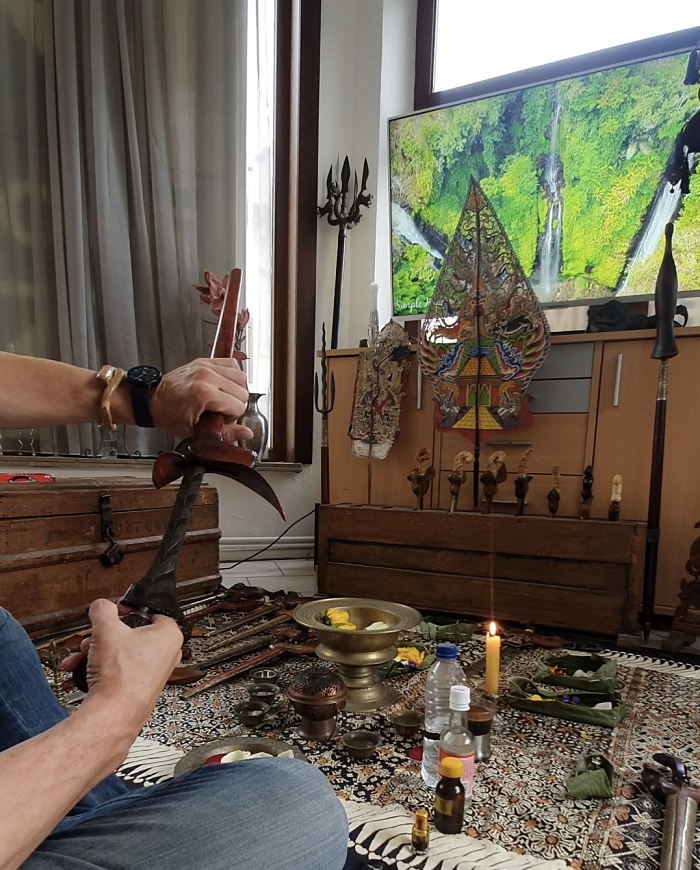 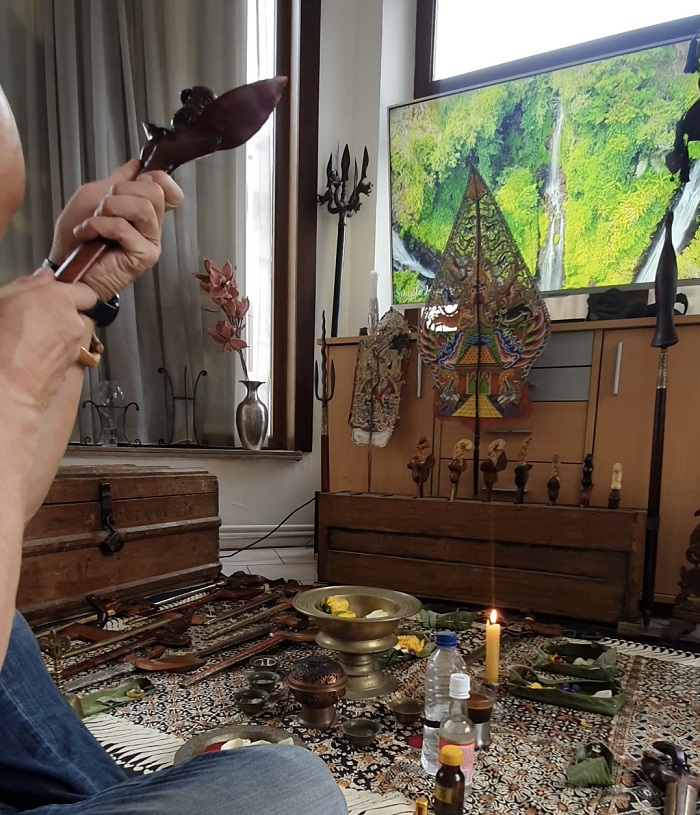 The rest of the keris, on a day like this i cleane and oil all my keris so some can go back in their places for the next 210 days